Learn about the fundamentals of cattle production

Learn about the fundamentals of cattle production

One of the primary dynamics of cattle production is that it is capital intensive business with sticky economics due its 44 month total production cycle. Cattle ranching requires a significant investment in breeding stock and feed due to the time it takes to produce a mature beef animal.  This period includes:

The entire period from birth of the mother to the final marketing of the offspring can be as long as 44 months, or even longer if the calf is kept on a diet of grass their entire life. Further, cows usually only produce one offspring, concentrating the investment in the mother into one calf. The production in a single offspring, and the long time frame needed to bring the offspring to market weight, results in a large investment in feed prior to the incurrence of any income. This dynamic is a fundamental aspect of cattle ranching. Increases and decreases in production can take years. Further, increases in beef prices result in decreases in supply as ranchers hold back young females for breeding rather than selling them to become beef cattle.

Grasslands and Croplands
A second dynamic of cattle production is that roughly 85% of grassland, which is much of the western U.S., is not suitable for crops such as corn, soybeans or even hay. This grassland is ideal for a cow to graze and rear her calf. Once the calf is ready to be weaned, the economics dictate that that calf is moved to the feed, rather than the feed moved to the calf. Due to trucking costs per ton, it is less expensive to move calves than it is the feed. 100 calves weighing 600 lb each is a 60,000 pound load. To get them to market weight requires that they double their weight, which will require roughly 240,000 pounds of feed. This differential is what drives the movement of cattle from non-tillable grasslands to feedyards located in cropland areas. The optimization of location minimizes combined transportation costs. Eastern Nebraska is in the Goldilocks zone for beef cattle production: not too far from the western grasslands, right in the heart of grain production. 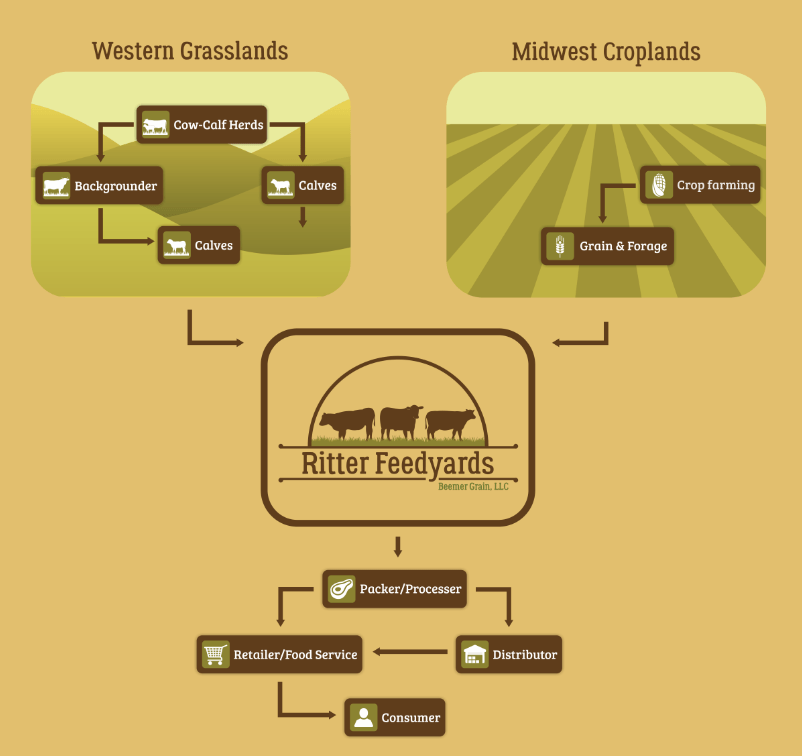 Price differentials
Steer calves are capable of adding muscle mass easier than heifers. As a result there is a price differential. For a 600 pound calf, this difference could be $0.10 to $0.13 per pound. There is also a differential for “choice” over “medium” calves that can be $0.10-$0.19 per pound. Lastly there is a difference in price depending on the weight of the calf. Lighter animals cost more per pound. Calves are the raw material, and getting them to survive to a weaning weight requires that the operator has overcome numerous hurdles. A 150-300 pound calf can cost 35-85% more per pound as 600-700 pound calf depending on gender and grade.

Cow-calf herds
As their name suggests, cow-calf operations consist mostly of mature cows, their calves and young females that have yet to produce offspring, knows as heifers. Cow-calf producers own breeding age females and may either keep to maturity or sell the calves after weaning. A cow-calf producer may sell calves at auction, keep the best females for breeding, sell them to or have them fed by a feedyard, or they may go to a backgrounder/stocker who continues to graze them on grass or other forages until they are 12 to 16 months old.

Backgrounders/Stockers
Backgrounding/Stocker operators are terms commonly used synonymously. They grow calves to prepare them for summer pasture or feedlot finishing.

Cow-calf operators sometimes keep their calves after weaning and keep them on pasture and sell them to a feedlot or have them fed by a feedlot as yearlings. Some operators buy calves to “background” on pasture. The majority of calves sold to backgrounders are steers – neutered males, given that young females are commonly held back as breeding stock.

Calves kept on pasture lack the nutrition and energy to make efficient gains and produce choice or prime grades of beef. However, some weaned cattle are too immature to create enough muscle to justify the high-energy diet used by feedlots/feedyards. As a result, some calves take the extra step of being “backgrounded” before being fed out at a feedyard.

Feeder Cattle
An ideal calf will gain weight quickly with a minimum of feed and produce a carcass weight desired by packers. The metrics which measure these attributes are: average daily gain, feed-to-gain ratio or feed efficiency ratio, and finish weight. Feeder cattle that are high performers will have a quality grade of Choice or Prime, have a Yield Grade of 3 or less1 (smaller is better, like your golf score), and a carcass weight over 850 lbs. Ideal carcass weight can change with feed and cattle prices. As feed prices rise and live cattle prices fall, it can become more economic to sell a lighter animal.

While there is no one-size-fits-all breed, some believe that an the ideal calf to be a steer that is 50-75% Angus, 25-50% Continental2 to provide extra muscling and improve yield grade, and 25% of any other breed to provide genetic vigor.

Feeder cattle are animals which have reached a stage of maturity, commonly around one year of age (“yearlings”) that can benefit from a high nutrient, high energy diet that is fed to them at a feedyard/feedlot in preparation for marketing to meat processors. Owners of feeder cattle include investors and cow-calf operators that desire to feed their calves to market weight and benefit from the profit thereof.

Marbling, the intramuscular lipids (fats) are what cause the taste, tenderness and juiciness we find in the finest restaurants. Almost all prime beef, the highest grade, is sold to restaurants. It is rare to find in grocery stores. Both Prime and Choice, the second highest grade, are almost always fed in a feedyard. These diets are created by nutritionists, and health is monitored by veterinarians. The diet is a mix of nutrients, forages and grains that permit beef cattle to gain the mass and add the marbling needed for marketability.

Cattle feeding enjoys economies of scale. Over 95% of all cattle feeding operations have fewer than 1,000 head 3. Economies of scale derive from three sources. First, like all construction costs, the planning, permitting, and breaking ground, equipment are labor are fixed costs that are spread around a much larger capacity. In addition, the marginal costs per unit for construction costs fall with larger sized projects. Second, equipment becomes more effiecient and costs less per unit of capacity than smaller equipment.  Third, the fixed costs of facilities and equipment are spread across more animals due to lower idle time. All of these factors lower marginal costs as scale increases.

Volatility
While cattle production profitability is not correlated with the stock market, it is effected by nature. During a prolonged drought,  cattle prices can fall dramatically when beef operations reduce herd sizes because of the high cost of feed. As cattle prices initially fall, cow-calf operators may not hold back heifers as breeding stock, thus putting a greater number of animals into the protein market.  These price downturns are inevitably followed by a beef shortage and higher prices. Consistently participating in cattle production is considered the most viable way to average out returns to long term averages.

Basics of Investing in Feeder Cattle

If you are new to investing in feeder cattle, start here

Investing in Cattle as an Asset Class

If you are a cow-calf operator or backgrounder, we would like to know you

If you produce grain, silage, or other feed, we’d like to hear from you